It was a long days journey into night when we set out for Colorado from Central California.  I was with my mate, John Thomson who was participating in the first Campdraft clinic competition being held in the US.  We both have "regular" day jobs that necessitated this being a very quick trip.  We set off after work on Tuesday evening.  The excitement of the adventure ahead and earlier hour meant that the second shift driver (me) was not likely to get much sleep before being called to take the wheel.

As we traveled through the desert the moon began to rise and clouds formed.  After passing Las Vegas on hour 5 of our trip, lightening strikes lit our way as we crossed Nevada and headed for Utah.

By morning we were in a new time zone and shortly after dawn near Green River, Utah we stopped for breakfast.  The rock formations and the landscape is spectacular in this part of the country and sometimes you can get lost in the sheer size of things.

We worked our way through Utah into Colorado reaching Kiowa almost exactly twenty four hours after we left.  Kiowa is a lovely little town of about 600 people (although there are many more in the surrounding areas) and it possessed a serene and welcoming attitude to strangers.


We had opted for a tent and a dry patch of ground to save on travel expenses, besides the nearest hotel was about 30 miles away.  Each evening, organizer Mary Harris had arranged for everyone to meet at a local restaurant for dinner.  Despite being a bit bleary-eyed and sleep deprived the adrenaline of arriving in Kiowa and the extra pump we got from knowing tomorrow there would be horses and riding, kept us going.  Plus, we wanted to get to know the other riders and, of course the clinicians. 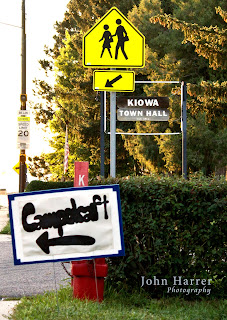 The sign was sufficient to let everyone know what was happening two blocks off the main road.

My job was to cover the event for the Australian Stock Horse Society.  Campdrafting is one of the top equine sports in Australia and Australian Stock Horses comprise the largest registry in the country.  My goal was to capture the feel and excitement of the event, the camaraderie of the riders and the instruction and patience of the clinicians.﻿


Pete Comiskey, Australian Campdrafter and Clinician came over to teach the Yanks his sport. 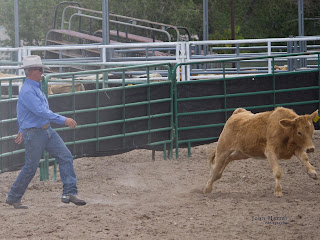 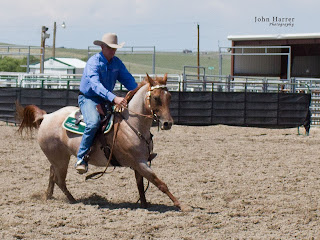 Steven Hart was another Clinician who traveled from Canberra, Australia to pass on his knowledge of campdrafting 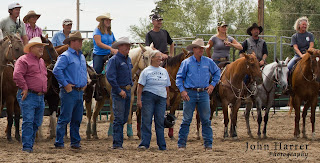 Partial shot of the 20+ clinic participants before the clinic begins 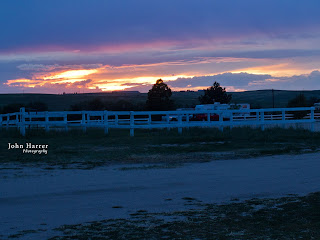 The end of a long but eventful day as the sun sets on Kiowa County Fairgrounds.

The event went extremely smoothly.  The judges clinic laid out the rules and scoring system and we got to watch a number of excellent runs on a big video screen.

Campdrafting is a simple sport in theory, yet deceptive in execution. It consists of a "camp", a pen where the "mob" is kept.  A mob is anywhere from five to seven beasts (or cattle) that a rider is required to enter, cut one beast out away from the mob, and then call for the "gate".  That call releases the beast, horse and rider into the "yard" where there are essentially two pegs the horse and rider must coerce  the beast around in a figure eight.  Once that has been completed the beast has to be driven through "a gate", in between two pegs at the far end of the yard.  Once the rider calls for the gate he and his horse have forty seconds to complete the yard work.

The clinicians broke the game into segments by first working in the camp.  Then, there were dry runs of the yard with horse and rider teams pairing up, one team play the beast, the other the competitor, and then switching places.

The next day there was a review and then work in the camp with live cattle.  More dry work helped riders get their horsemanship skills in order, then it was back to live cattle work.  By the end of Saturday afternoon everyone felt confident they could make a show at the competition on Sunday.

Sunday morning brought a flood of entries, many from cowboys who had not attended the clinic and still wanted to give the competition a shot.  There were over 150 runs made on Sunday and everyone had a good time.

As the competition was coming to a close, I had gotten all my photos and video and it was time to crawl back in the truck for the trip home.  We were delayed by a power steering hose failure for about four hours in Utah, but that just gave us an opportunity to grab some shut-eye and exercise the horses.  Except for the expense, it was a good thing.

Flash floods pelted us for about 30 miles outside of  Las Vegas and cooled the desert off.  It was three in the afternoon and the temperature, which is usually always in the 100+F during August, was a mild 77 degrees.

With fewer stops and a desire to get to the comfort of our own beds we made it home in a little over twenty four hours, six days after we left.  While this was a fun and worthwhile adventure, I hope to take a little more time on the next one and see a bit more of the country I'm passing through.  Also, it would be great fun to ride in the clinic and put my horse to the test of campdrafting.


The latest podcast form The Whoa Podcast about Horses and Horsemanship!


The US National Campdraft Association's first clinic and sanctioned competition is in the books and The Whoa Podcast about Horses and Horsemanship was there to cover it!  We grabbed our cameras and microphones and headed to Kiowa, Colorado under the sponsorship of the Australian Stock Horse Society.  The Australian Stock Horse is a relatively need registry here in the States, but the owners that have them brought them to Kiowa.

We speak first with Australian Campdraft Professionals and Clinicians Pete Comiskey and Steven Hart.  Then we get a real feel for the event by interviewing the particpants of the event.  And, because there were so many Aussie saddles there, I found a saddle maker, James Root, to tell me about his custom made saddles.
We would also like to thank the folks who took time to talk with us:  John Thomson, Kiki Pantaze, Paul Johnson, kellee Campbell, Linda Hingst, Blake Hingst, Tony Navarra, and James Roots.

Check out this episode!
Posted by John Harrer at 10:26 AM No comments:

The Fairgrounds Are Empty and the Dust has Settled

The fairgrounds are empty and the dust has settled.  And, while everyone has made it safely home, the excitement and enthusiasm for this new-to-America sport still has everyone buzzing.  Talks are underway about next year's clinic and competition and schedules are be checked and double checked to see how many events can be fit in while we have instructors over from Australia.  I spoke with organizer Mary Harris and she told me there were 162 runs at the competition!  This is truly amazing for a first time event.  Mary also said many more people have contacted her about attending the clinic next year and she is looking forward to hosting it again.

Meanwhile, I've been editing photos, video and audio files from the event and I've collected a montage in the hopes for giving you a feel for the clinic and competition as well as the riders thoughts about their horses and the events.  You can view the video below and I hope you will give me you thoughts and leave a comment.  Also, I hope you will share the video with your friends and help spread the word for this fast-paced event.

In between warming up their horses and waiting for the crack of the whip to start the draft, excited Americans and even a few Aussies, line up for a group photo.  Many of the riders were using Australian Stock Horses for the event.

Here is Blake's run to take the Encouragement Rider draft and the first run of the day.

Posted by John Harrer at 2:30 PM No comments:

Horses and rider doing their job

The clinic participants finally get their hand at the beasts.  All the practice on dry runs finally gets put into use on live cattle.  .

Posted by John Harrer at 5:32 PM No comments:

Saturday is Cow Day at the clinic

The horses were all doing great and the riders were doing even better. The day started off with a little refresher and some dry work.  The the cows came to the camp and the excitement of both horses and riders is on the rise.

Posted by John Harrer at 5:05 PM No comments:

Friday Is a Busy Day!

The boys had the clinic rolling pretty good today. Everyone spent a lot of time on their horses.  There were a lot of practice runs.  The morning was spent on working in the "camp" and learning how to cut a beast.  After a hearty lunch, everyone was back in the arena for the afternoon session getting ready for the beasts.

Posted by John Harrer at 2:58 PM No comments: